You are here: Home / News / HIstory Of Linux

The history of Linux began in 1991 with the commencement of a personal project by Finnish student Linus Torvalds to create a new free operating system kernel. Since then, the resulting Linux kernel has been marked by constant growth throughout its history. Since the initial release of its source code in 1991, it has grown from a small number of C files under a license prohibiting commercial distribution to the 4.2.3 version in 2015 with more than 18 million lines of source code under the GNU General Public License v2.

The creation of Linux 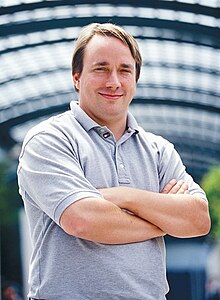 In 1991, while studying computer science at University of Helsinki, Linus Torvalds began a project that later became the Linux kernel. He wrote the program specifically for the hardware he was using and independent of an operating system because he wanted to use the functions of his new PC with an 80386 processor. Development was done on MINIX using the GNU C compiler. The GNU C Compiler is still the main choice for compiling Linux today. The code however, can be built with other compilers, such as the Intel C Compiler.

As Torvalds wrote in his book Just for Fun, he eventually ended up writing an operating system kernel. On 25 August 1991, he (at age 21) announced this system in a Usenet posting to the newsgroup “comp.os.minix.”

Hello everybody out there using minix –

I’m doing a (free) operating system (just a hobby, won’t be big and professional like gnu) for 386(486) AT clones. This has been brewing since april, and is starting to get ready. I’d like any feedback on things people like/dislike in minix, as my OS resembles it somewhat (same physical layout of the file-system (due to practical reasons) among other things).

I’ve currently ported bash(1.08) and gcc(1.40), and things seem to work. This implies that I’ll get something practical within a few months, and I’d like to know what features most people would want. Any suggestions are welcome, but I won’t promise I’ll implement them 🙂

PS. Yes – it’s free of any minix code, and it has a multi-threaded fs. It is NOT portable (uses 386 task switching etc), and it probably never will support anything other than AT-harddisks, as that’s all I have :-(.

Linus Torvalds had wanted to call his invention Freax, a portmanteau of “free”, “freak”, and “x” (as an allusion to Unix). During the start of his work on the system, he stored the files under the name “Freax” for about half of a year. Torvalds had already considered the name “Linux,” but initially dismissed it as too egotistical.

In order to facilitate development, the files were uploaded to the FTP server (ftp.funet.fi) of FUNET in September 1991. Ari Lemmke at Helsinki University of Technology (HUT), who was one of the volunteer administrators for the FTP server at the time, did not think that “Freax” was a good name. So, he named the project “Linux” on the server without consulting Torvalds. Later, however, Torvalds consented to “Linux”.

To demonstrate how the word “Linux” should be pronounced ([ˈliːnɵks]), Torvalds included an audio guide with the kernel source code.

Linux under the GNU GPL

Torvalds first published the Linux kernel under its own licence, which had a restriction on commercial activity.

The software to use with the kernel was software developed as part of the GNU project licensed under the GNU General Public License, a free software license. The first release of the Linux kernel, Linux 0.01, included a binary of GNU’s Bash shell.

In the “Notes for linux release 0.01”, Torvalds lists the GNU software that is required to run Linux

Sadly, a kernel by itself gets you nowhere. To get a working system you need a shell, compilers, a library etc. These are separate parts and may be under a stricter (or even looser) copyright. Most of the tools used with linux are GNU software and are under the GNU copyleft. These tools aren’t in the distribution – ask me (or GNU) for more info.

In 1992, he suggested releasing the kernel under the GNU General Public License. He first announced this decision in the release notes of version 0.12. In the middle of December 1992 he published version 0.99 using the GNU GPL.Linux and GNU developers worked to integrate GNU components with Linux to make a fully functional and free operating system. Torvalds has stated, “making Linux GPL’d was definitely the best thing I ever did.”

Around 2000 Torvalds clarified that the used license for the linux kernel is exactly the GPLv2, without the common “or later clause”.

In 2007, after years of draft discussions, the GPLv3 was released and Torvalds and the majority of kernel developers decided against adopting the new license for the linux kernel.

For more details on this topic, see GNU/Linux naming controversy.

The designation “Linux” was initially used by Torvalds only for the Linux kernel. The kernel was, however, frequently used together with other software, especially that of the GNU project. This quickly became the most popular adoption of GNU software. In June 1994 in GNU’s bulletin, Linux was referred to as a “free UNIX clone”, and the Debian project began calling its product Debian GNU/Linux. In May 1996, Richard Stallman published the editor Emacs 19.31, in which the type of system was renamed from Linux to Lignux. This spelling was intended to refer specifically to the combination of GNU and Linux, but this was soon abandoned in favor of “GNU/Linux”.[citation needed]

This name garnered varying reactions. The GNU and Debian projects use the name, although most people simply use the term “Linux” to refer to the combination.

How To Use Systemctl to Manage Systemd Services and Units

ERROR 1794 (HY000): Slave is not configured or failed to initialize properl...
Scroll to top